"Hello residents of the Earth Dimension!

I am Commander Roo of the Marle Elite Task Force, and your world is in grave danger!

Slime creatures from another dimension are on their way to Earth. They’re pests and cause havoc everywhere that they go.

I have very little time to explain but I must find a person with a pure heart to bestow the magic stone upon.
This stone will bring out their inner self and enhance their physical and mental capabilities. In short, it will turn them into a magical boy!"


In HEROxTRIO you play as Roo, help him choose the best person among a group of friends to bestow the stone upon.
Save the Earth from annihilation and maybe even provide some love advice.

PROGRESS IS ON HIATUS

As team members are all currently working on other projects and handling our own personal lives, work on HEROxTRIO is currently on hiatus.  We hope to return to working on this project at a more convenient time. Thank you for your patience and we hope to see more of Roo and the gang soon.

Its worth of waiting

is there a full version out?

This game is on indefinite hiatus. Please read the game's page for details.

I've played the demo and it's really great! Pari is the best xD

It seems like a really cute and entertaining game! I keep encountering a bug though, when in battles the timer keeps running but selection an option is delayed and the next fighting "move" options dont show up in time triggering a battle lost.

Hm, that's a new one.  I won't be able to work on fixing it any time soon (since all the files for HEROxTRIO are on a different computer in a different state) but I've made a note of the bug and will look in to it when I can.

The whole battle system will need to go through a reprogramming to make it run smoother since there's been a few issues with the timer.

Thanks again for letting us know =D

This game is amazing its so cute

I really can't wait for the final product

I'm so glad you enjoyed it! I personally love tough guys that are actually softies, which is one of the reasons why Pari is the way he is.

The production of the game is currently on hiatus, but we'll hopefully return to it when we can.

Thanks again for your kind words.

Nice job so far, Red! I love the fancy outfits the guys get when they transform. Good luck working on the full release!

The demo is adorable and I had fun getting to know the three characters. I like how they play off each other's snark and I think Pari's my favorite.

Will the full game have separate routes where only one of them become a magical girl? (Can that be answered with no spoilers?)

Looking forward to the full release!

I'm glad you enjoyed the game!

In short, yes. (trying not to give spoilers) lol.

Really cute and fun to play!

I'll be looking forward to the full version ;)

Certainly worth playing, if you're interested in that genre.

The character graphics are well drawn and pretty nice to look at. In their regular forms, Rex would be my favorite, but with the magical versions, Pari is hard to beat. His (regular) looks and personality kinda reminded me of Kanji from Persona 4.

Although I do have one little issue: the sprite of Rex during the scene where they try to come up with a name looks a bit weird. I don't know much about perspectives, but seeing his whole mouth from the side and not his eyes is a bit uncanny.

The writing is solid slice-of-life/magical girl material. Light, but amusing and at times tense and exciting.  Best personified by Roo, a pink, magical kangaroo from another dimension. What more can you ask for?

The small faux-ATB battles in a visual novel are an interesting addition, although there was more than enough time and the right choices were obvious. But then again, you're fighting green slimes, so the battles might get more difficult in later chapters of the complete game?

The first tune of the soundtrack with its weird synthetic sounds reminded me of Earthbound, one of my all-time favorite games. I really liked that piece. The other tracks fit the RPG-inspired elements of the VN pretty well. Although I was a bit confused that no sound played in the main menu.

As a whole, it reminded me a bit of the RPG Maker games that I played in the early 2000s. And by that, I mean the fond memories of fighting slimes in the only games my computer could handle back then, not the "Looks like a RPG Maker game" sneers that are all over the internet now.

Looking forward to the full version!

Hi fricochet!
Thank you so much for the kind words and feedback!!! We really appreciate it!

Yes our sprite artist, Adhylia, is a real magical girl ^w^ her style happened to match well with Uncle Mugen's backgrounds so we were lucky in the art department.
And I understand what you mean with Rex, to be honest that's just due to my own laziness, haha.  For now we are using that as a placeholder but Adhylia and I will be working on proper CG scenes (similar to the main menu art) for the full release.

I'm glad you like the battles, yeah I made them easy to win to begin with.  As I learn more coding and try knew things, I'm hoping to make the battles a little more difficult, so I hope you enjoy what is to come.

I haven't found a musical piece I liked enough for the main menu yet.  I'm considering hiring someone to create a piece.  But that is currently at the bottom of our to do list.

Seriously, thank you so much for playing and I'm glad you enjoyed it! It means a lot to hear this.

Haha, I admit Binan Koukou was definitely one of the inspirations for this game. As well as Magical Girl One and a few others. 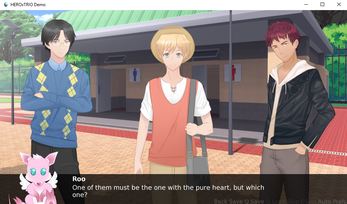