You play as Rin Matsuoka, the young sultan of a fictional land. One day, you are informed by captain Mikoshiba, the captain of the palace guards, that rumours have arisen of someone being sent to kidnap you. You decide to leave the palace, against the suggestions of the captain, to get in contact with your friends in the city that you believe may be able to help you solve who has been sent to abduct you.

This is a fanmade game based off the season one ending to the anime Free! Original  character designs by Koji Oji and owned by Kyoto Animation. It is not intended to infringe copyright laws or be commercialized for monetary profit. I highly recommend watching the series Free!  Iwatobi Swim Club as well as the second season Free!  Eternal Summer.

Thank you for checking out my game :)

Red's note:
I started working on Free! Arabian Nights back in 2015. I took a short hiatus for over a year but after 3 years of drawing and redrawing sprites, late nights coding, many writer's blocks and plenty of moments of Why am I still doing this? I am so happy to finally be able to release a finished version of this game.

This game was made by a fan, for the fans, and so I truly genuinely hope that you enjoy this game.

Red's note:
Although the game itself is Free! (pun intended) you can support me by donating or buying the new poster art.  The folder includes a 1920x1080 desktop wallpaper as well as a 2480x3507 HQ poster.

It's a very simple story with a background story pretty similar to the original anime. The way anime act is similar as well and it's very enjoyable.

Hello, I really liked this game very much. I thought the story was enjoyable and had a good plot. I love the anime Free! and in my opinion you did a good job with the character personalities and how they would act in this type of situation. I liked the design and thats pretty much all i have to say

Thank you so much! As a fellow fan, I'm glad you think I got their personalities right. That's always one of the hardest parts of making a fan game. =D

hi, so I know you need to extract the zipped folder to play the game but it either says the folder is empty, or that it needs a password to extract the files. I'm just slightly confused as why this is happening or if I've downloaded it wrong, sorry for bothering you with this <3

That is strange, could you tell me exactly which file you downloaded and what type of computer your using? If you're on a PC and you downloaded the Mac file I know the game won't run but there should still be files in it.

thank you for responding! I have windows HP pc, and I downloaded the windows zip file ^^ so its  the correct version for my pc, haha maybe my pc just doesn't want to work for this unfortunately.

Hm, I'm unsure what the problem could be in this case.  The best I can do for now is provide you with a link to an older version of the game to see if that works (the story is complete, I think it is just missing the CGs).  Otherwise if that doesn't work, I won't be able to release any updates on this game until March due to my current living arrangements.  I'm sorry I can't offer any other solution right now, but I'll keep thinking of ways to fix the problem so you can enjoy the game =]

if you wouldn't mind I would appreciate that! and thank you again for speaking with me about the issue ^^

i liked the story but i wish there was more bl/yaoi aspects to it :/

Thanks so much for playing and making a let's play video!

If you get the chance there is a walk-through available that shows how to get all the endings. Including the BL ones, hehe =) but yes the game is pretty light when it comes to bl/yaoi since I wanted it to be more story focused.

Hey <3 I loved the game, it was very interesting! I liked the sprites a lot, congratulations on completing it!!!  However i was curious as to how many love interest are in the game...? Anyways, i enjoyed it a lot! :)

I'm so glad to hear you liked the sprites and enjoyed the game! Thank you for the kind words.

Reply
Neeka of OBP1 year ago

I'm not part of the fandom, but I'm glad games like these are being created to normalize more fan-made games and content! (Though I haven't seen the anime I'm still tempted to play!)

Haha, I hope the story of the game makes enough sense without having to watch the anime series. But there are some references that may not make sense.

Either way, if you do play it I would love to hear your opinion.

Great demo! I was impressed with how many choices there already are. The story has really nice pacing, and I loved the little touches, such as how Sousuke's sprite moved from side to side slightly when he was trying to find a spot to sit in Makoto's store. Take as much time as you need for this wonderful project!

Thank you so much for the support. I'm glad you liked the little touches, coding is not my specialty but I hope you enjoy what other things I have planned for the rest of the game. Hehehe

Hi!! This looks interesting - will a route be available for Rei?

Unfortunately there is no planned route for Rei. =(

But he will be making an appearance in the game =) 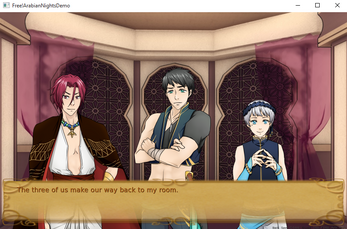 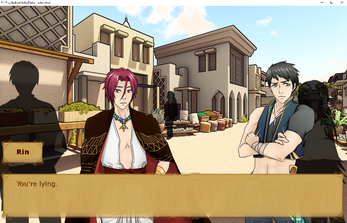